EPA gets busy with Area Two on Velsicol contamination site

After successful decontamination of a one-acre patch of the Velsicol Chemical site last year, the EPA now turns its attention to Site Two, which is so big it must be tackled in two phases.

As with Area One, the soil will be heated to more than 100 degrees centigrade, which causes the contaminants to become gaseous and rise to the surface for collection and safe disposal. 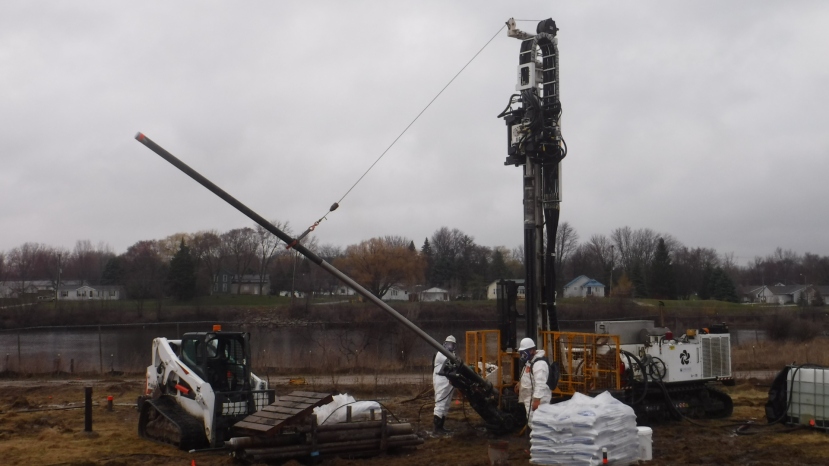 Workers in the process of drilling holes in Area Two.

In October they expect to begin heating the first half of Area Two and start drilling holes in the second half.

Alcamo expects the first half of Area Two will be completed in August 2020 and the second half in July 2021.

“We’re going to be using a lot of electricity,” Alcamo said.

“Use all your want,” quipped Councilman Jerry Church (as the city profits from the sale of electricity).

Seven air monitors will be deployed to protect residents.

Funding is not a problem, Alamo said. “Money. I’ve got the money. Not all of it but I’ve got in excess of $17 million already and expect to get the rest. It’s going to be around $25-plus million (for decontamination of Area Two).”

Church asked Alcamo about the area where the refinery was located.

“We have that design done, and that will be the next phase,” Alcamo said. “There’s going to be about a 100,000 tons of contaminants in that area being excavated; a lot of it is oily sludge where the refinery was. From a health standpoint it’s really not going to be a problem. But from an odor standpoint it’s definitely going to be a challenge. We’re going to be doing some of that work in the late fall and early winter.”

The earliest that EPA officials expect the excavation to begin is the fall of 2021, if funding is provided. The excavation project would take place over two years.

“We did some bank sampling near the athletic fields and found heavily contaminated locations at depth,” Alcamo said. “So the bank is pretty much clean near the surface where clean sediment has come over it, but behind it is pretty high levels of DDT. So that’s all going to have to get addressed.”

Bank sampling will continue farther downstream “in the next month or so,” Alcamo said.

The burn pit is located on the north shore of the Pine River and was where Velsicol burned things.

This site is contaminated with chemicals, too, and tentatively scheduled for thermal treatment. Alcamo hopes to have the design done by July.

He is in discussions with David Crumbaugh about putting access road on his property off Hebron Street so equipment can be moved to the burn pit site.

The owners of nine homes near the burn pit that have wells have agreed to accept city at EPA expense. Two other at-risk homeowners have refused. “I’ve written them a couple letters and they’re just not interested,” Alcamo said. “Hopefully they’ll change their minds.”