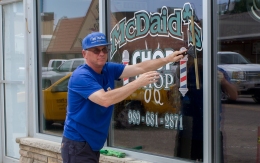 Water Department personnel discovered a fire hydrant on the corner of Union and River Court on Monday, Jan. 3, was damaged by a vehicle.

A CSC complaint was reported at 1:55 p.m. Monday, Jan. 3. The complaint is under investigation.

An officer provided traffic control at 5:06 p.m. Tuesday, Jan. 4, while firefighters put out a structure fire in the 600 block of Teman Street.

Police responded to a domestic assault in progress at 3:23 a.m. Wednesday, Jan. 5. Eugene Watkins Jr., 39, of Saginaw, was arrested, jailed and charged with domestic violence, resisting arrest and assault with intent to do great bodily harm less than murder (by strangulation). Watkins is due in court Jan. 20 for a preliminary exam. He has multiple prior run-ins with the law, including carrying a weapon with unlawful intent, domestic violence, larceny ($1,000 to $20,000) and cocaine possession.

A 27-year-old Saginaw resident was taken into custody at 2:22 a.m. Saturday, Jan. 8, after a car he was a passenger in was stopped for a moving violation on M46. A check on passenger and driver showed the passenger had multiple warrants from police agencies in Michigan and Ohio. He was jailed to await extradition to Ohio.

A 35-year-old Alma resident lost control of his or her vehicle on Cheesman at Countryside Drive and went off the road at 6:15 p.m. Tuesday, Jan. 11. Police responded and learned that the driver’s license had been suspended. He or she was issued a court appearance ticket. The vehicle was impounded.

A 26-year-old Sandusky resident complained of minor pain after his or her vehicle was rear ended by a 59-year-old St. Louis resident at 3:10 p.m. Friday, Jan. 14, on M46 at Franklin. Both vehicles had minor damage.

A CSC complaint was reported at 10:49 p.m. Sunday, Jan. 16. The complaint is under investigation.