Fire board doubles money set aside for equipment upgrades

St. Louis Area Fire Department board members doubled the amount of money set aside annually to replace worn out trucks and other costly equipment at their meeting Tuesday.

Instead of contributing $30,000 to the capital outlay fund in the 2020-21 fiscal year the three townships and the city that comprise the Mid Michigan Community Fire District will contribute $60,000 unless one or more of the township boards and the St. Louis City Council object. 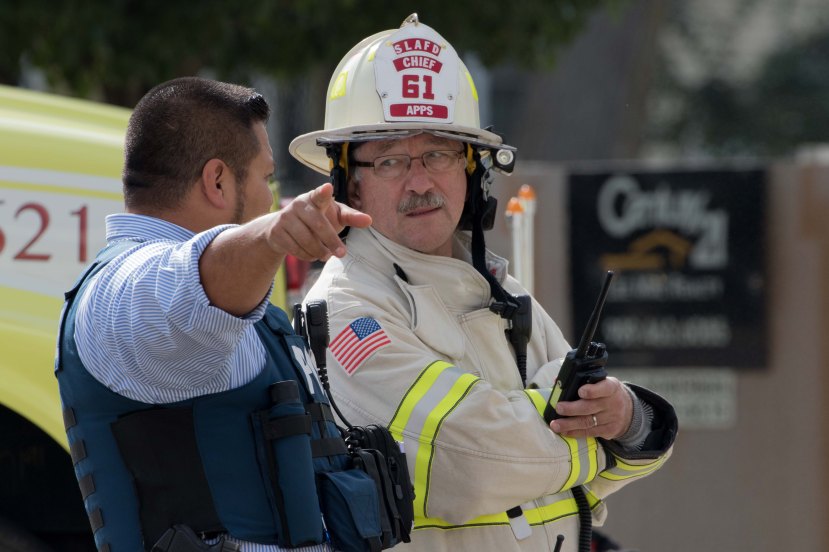 Jasper Township Supervisor Carmen Bajena said it will “make a few people squeak” but felt her trustees can handle it.

That sounds like an ample source of money for new equipment, but a replacement for the fire department’s 24-year-old pumper would cost $400,000, Fire Chief Rich Apps said.

Apps plans to apply for an Assistance to Firefighters grant from the Federal Emergency Management Agency to help pay for that. March 13 is the filing deadline. Apps doesn’t know if he will be able to submit his grant request by then. “The grant would not cover the full cost,” Apps said via email. “A grant could be awarded for any amount up to a maximum of $325,000 is my understanding. The fire department would have to pay the balance.”

“I don’t want to pay any more,” said Pine River Township Supervisor Kevin Beeson. “But I don’t want to get to the point that we can’t afford to buy what we need. Everything (Apps) is showing us to tonight is all six digit numbers.”

The fire board voted to approve the change despite not being sure if every township board and city council will go along with it. “If you can’t afford to do it you gotta let us know and we’ll call a special meeting to figure out what we’re going to do,” Beeson said.

Even $60,000 a year for capital improvements is probably too low, said St. Louis Finance Director Bobbie Marr. The amount should probably equal the depreciation of all fire department equipment ($74,000/year), she said. “That’s really what our reserve should be. Should have been all along. The $60,000 is completely reasonable based on what our depreciation is. And yet we’re behind.”

The railroad and the vacant lot

The fire board hopes to lease a half-acre lot next to the fire hall on South Main, but the railroad that owns it is hard to work with.

A Mid Michigan Railroad attorney told Chief Apps that it will cost upwards of $4,000 just to apply for and process a lease agreement, and no discussion of the lease amount can occur until that money is spent.

“The attorney’s assessment was that it would probably be more than the fire department would want to pay unless he could get them to come down on it,” Apps said.

Apps would like to “tear the concrete mess out of there, and it would look like something. It would be an area we could use for accessory parking when we have classes and things there.”

Finance Director Marr said the railroad has a financial incentive to make a lease deal because it has essentially used the city as a lawn service for a number of years. “In 2019 there were 12 yard clean up/mowing bills to that piece of property,” she said via email. That railroad expense would go away in the event of a lease deal.

Beeson suggested that he and Apps write to the railroad attorney saying, “Look, we’re not trying to build an apartment project. We just want to clean it up. It’s next door to us and it looks like crap. And you’re paying for it. Why don’t we meet on common ground?”

“But I don’t recall that getting any traction,” Beeson added via email.

“It would be nice to own or control that property next to us and develop it for whatever we want as we go along,” Beeson said.

Apps said a recruiting video made with the help of Mac TV has been viewed 11,000 times on the fire department’s Facebook page and resulted in interest from a firefighter and and Air Force retiree who are moving to St. Louis. “Hopefully within the next month we’ll see a couple applications,” he said.

“At Christmas I was given an envelope,” Apps said. “There was a little hand-written note in there. It said, ‘Fire chief: Here is $50 for the fire department. Use it to buy tools or turnout gear or fire trucks or whatever you need.’ And that was from a 10-year-old boy who gave us $50 for Christmas.”

Apps is pursuing a grant to buy a “Lucas device” to do chest compressions for CPR. The Midland fire department has one and is “seeing successful resuscitations and survival rates skyrocketing,” Apps said. “For 2019 Midland County had a 21 or 22 percent survival rate for cardiac arrest. That’s people leaving the hospital alive and functional. The national average is 8 percent.” The cost of a Lucas device with carrying case and accessories is $16,600.

The fire department got high marks from a recent audit, Marr said. “The opinion was the best opinion that we can have. It means we reported everything in accordance with generally accepted accounting principals.”